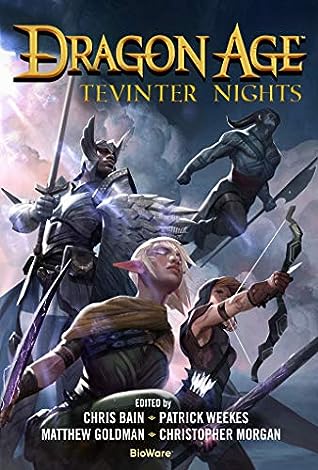 From the stoic Grey Wardens to the otherworldly Mortalitasi necromancers, from the proud Dalish elves to the underhanded Antivan Crow assassins, Dragon Age is filled with monsters, magic, and memorable characters making their way through dangerous world whose only constant is change.

Like all anthologies, it’s hit or miss.  The main appeal of the book comes from not just being a return to Thedas, but the range of adventures and information it gives.  Set after the events of Inquisition, we get a glimpse of what the Venatori have been up to, insights into how the Mortalitasi function in Nevarra, a little Grey Warden-ing, some Crows in action and a few cameos from some favorites like Dorian Pavus and Cassandra Pentaghast.

It’s a mixed bag, but it adds to the lore & mythology of Dragon Age as well as a few teases into what might be coming next.  Good stuff.